In tonight's episode, Anita finds it difficult to cook food because she is not used to the kitchen and Vibhuti refuses to help her. 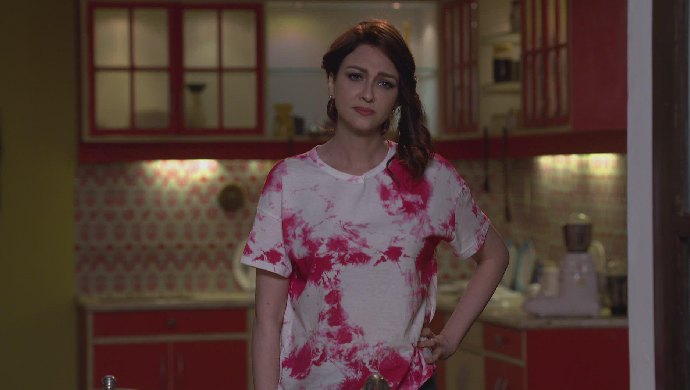 In the previous episode of Bhabi Ji Ghar Par Hain, Manmohan gets angry on Angoori for spending 50,000 rupees as a monthly expense. When Angoori tells this to Amma, she decides to scold Manmohan. Anita and Vibhuti have an argument over the topic of spending money and they come to the conclusion that both of them will live separately. Vibhuti packs his bags and settles down in the veranda of their house.

In tonight’s episode, Manmohan gives 5000 rupees to Angoori and asks her to manage the household expenses with it. She tries to tell him that it won’t be possible but he doesn’t listen to her at all.

Angoori calls Amma and tells her about Manmohan’s behaviour. The latter gives her an idea to deal with the situation. Meanwhile, Anita finds it difficult to prepare food because she does not know where Vibhuti keeps all the masalas and vegetables. When she asks Vibhuti about it, he refuses to help. Anita gets angry and throws water on him.

Later that day, Tika and Malkhan come with their luggage at Vibhuti’s place. They request him to allow them to stay there. Vibhuti tells them that they will have to pay 100 rupees each if they wish to stay there. Malkhan discusses with Tika that if they sleep on the roads then Happu Singh will take money from them and also punish them. They agree to stay there and Vibhuti clarifies to them that they won’t get any food and will have to manage to go out for the toilet.

In the preview of the next episode, Manmohan asks Angoori to bring one more cup tea but she tells him that according to the budget they can only drink one cup of tea a day. Anita asks Manmohan to help her with the household chores.

The Verdict State Vs Nanavati: The Twisted 1959 Case That Inspired The Web Series

5 Romantic Places In India To Visit With Your Partner This Valentine’s Day!