In tonight's episode, Vibhuti flushes the ring and Anita blames Tiwari for everything. Tiwari then goes to find the ring in the drainage. 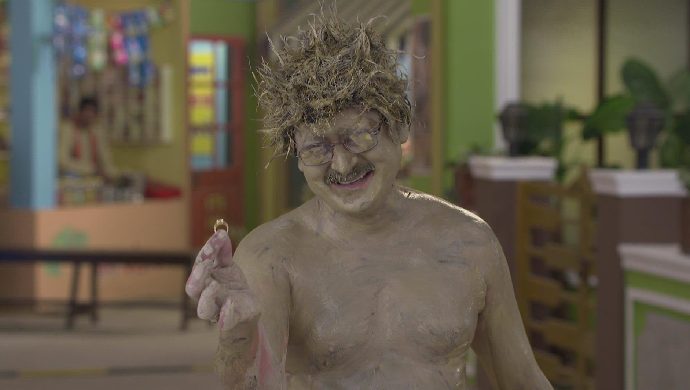 In the previous episode of Bhabi Ji Ghar Par Hain, Anita calls Happu Singh and informs him that Vibhuti has been kidnapped. When Happu Singh finds Vibhuti, he comes to know that Tika, Malkhan and Tillu were being told by someone else to kidnap Vibhuti and get the ring. Angoori comes home with a new Kadha and tells Vibhuti that this will work for sure. Angoori, Anita and Tiwari force Vibhuti to drink the Kadha. Later at night, Vibhuti starts having loose motions and Anita gets excited.

In tonight’s episode, Anita gets excited when Vibhuti tells her that he is getting pressure and runs towards the toilet. She calls Angoori and Tiwari and tells them that the Kadha finally worked. A few moments later, Vibhuti comes out and tells her that his stomach is cleared but he pressed the flush button by mistake.

Anita gets annoyed and puts the blame on Tiwari. She then asks him to get the ring from the drainage. The latter goes to Tika, Tillu and Malkhan and offers them Rs 5000 to get the ring. The trio refuses the offer saying they may be needing money but they won’t do such things at all. Next day, Angoori tells Anita and Vibhuti that Tiwari has not come home yet.

Just then, Tiwari comes there covered in filth and tells Anita that he found her ring. Anita, Vibhuti and Angoori cover their nose because Tiwari is stinking. A few moments later, a jewellery shop owner comes there and asks her about the 1.5 crore ring. When he sees the ring, he informs Anita that it is fake and the latter feels bad.

In the preview of the next episode, Anita forces Vibhuti to become Tiwari’s father. She asks Tiwari to pay Rs 10000 in return.

What To Do If Your Parents Don't Like Your Boyfriend? Here Are 7 Tips To Convince Them