In tonight's episode of Bhabi Ji Ghar Par Hain, Anita arranges a party to announce that Vibhuti is lawfully adopting Tiwari as his son. 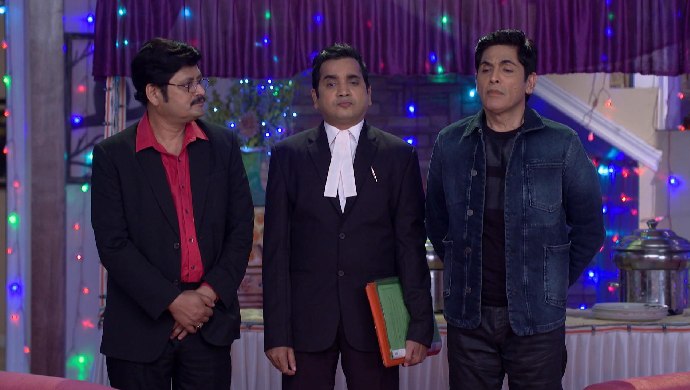 In the previous episode of Bhabi Ji Ghar Par Hain, Anita notices that Vibhuti is upset for some reason. Upon asking why he says that he wants to be a father. The former gives him a reality check saying that he does not have enough cash to raise a kid. Vibhuti avoids the topic and goes into the kitchen to make coffee. On the other hand, Tiwari is badly missing his father because he does not know who he is. Amma comes home and tells Tiwari and Angoori that Pandit Ramphal has suggested him to make someone his lawful father so that he will have success in life.

In tonight’s episode, Tiwari comes home and tells Anita that he wants Vibhtui to become his father for the next few days. Anita demands ten thousand rupees per day and Tiwari agrees to pay. Vibhuti keeps on refusing this, but Anita convinces him saying it will help them earn money.

The next day, Anita arranges a party to announce that Vibhuti is lawfully adopting Tiwari as his son. Hearing this everyone gets shocked. Anita then tells Saxena to start the legal procedure and declare Vibhuti and Tiwari as father and son. Saxena asks the two of them to kiss each other and they end up kissing lip to lip. Later that day, Tiwari gets romantic and is about to kiss Angoori when Vibhuti comes in between. Vibhuti restricts Tiwari from disturbing Angoori.

Later at night, Vibhuti returns home and gets close to Anita. Just then Tiwari walks in to take his revenge. He tells Anita that Vibhuti disturbed him while he was romancing Angoori.

In the preview of the next episode, Vibhuti tells Anita that his bond with Tiwari is getting better day by day. Similar is the case with Tiwari.

Sargun Mehta Excited To See Ravi Dubey And Nia Sharma Back Together For Jamai Raja 2.0