In tonight's episode, we see Istarri choosing her groom. Find out who it is inside. 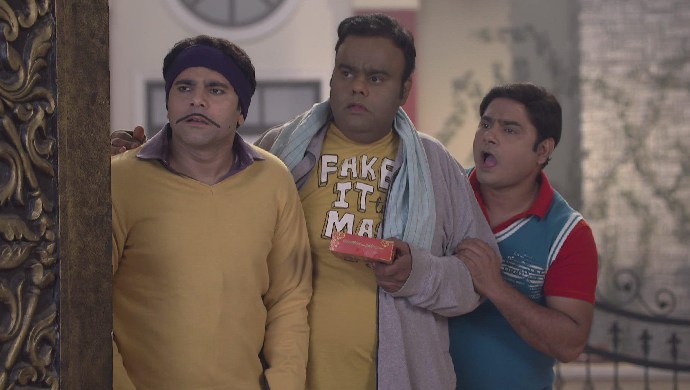 In tonight’s episode of Bhabi Ji Ghar Par Hain, we see the Swayamwar for Istrri, taking place in full swing. All the grooms are ready to woo their prospective bride, who looks much less like a dulhan and more like a ghost. Both Vibhuti and Tiwari, who are still possessed, show signs of being haunted every now and then. This freaks out their wives, as they observe their husbands twisting their mouths and making ugly, fearsome faces.

The Swayamvar begins and the first round is a dog-walking one,  where all the grooms walk and flaunt themselves for the bride. After the first round is over, the next one is a question-answer round, where Anita quizzes prospective grooms Tika, Tillu, and Malkhan as well as Saxena. While the other three men answer in a selfish manner, Saxena comes out with flying colours and gets chosen as the groom. Finally, everyone gets ready to marry Istarri off when she says that she will need a few drops of everyone’s blood, as that is the tradition with which she can get married.

At night, Istarri takes on her real form and roams around the streets, as if she is hunting her new prey. A doctor sees her and recognises her for who she really is. She then chases him down, and takes him away, leaving just his clothes behind. When Happu Singh finds this out, he decides to conduct a proper investigation in this matter. At home, a possessed Vibhuti and Tiwari, try to convince their wives to give their blood to Istarri.

In the upcoming episode, we see Istarri, who has married Saxena by now, drinking everyone’s blood. After a while, both Angoori and Anita see their husbands in a scary form and scream. What will happen next? Share your thoughts in the comments section below.

Watch The Comedy Happu Ki Ultan Paltan Exclusively On ZEE5
EXCLUSIVE! Jimmy Sheirgill: Rangbaaz Phirse Is Based On Those Who Got Pushed By The System
Happu Singh
Rajkumar Rao and Aparshakti Khurrana Host the Zee Cine Awards.
Aasha from Daayan

Exclusive! Kark Rogue Actor Rajesh Sharma: We Shot Every Scene Both In Hindi And Bangla