In tonight's episode, Gudiya decides to cook food since Sarla is unwell and Sweety has gone out to attend her friend's wedding. 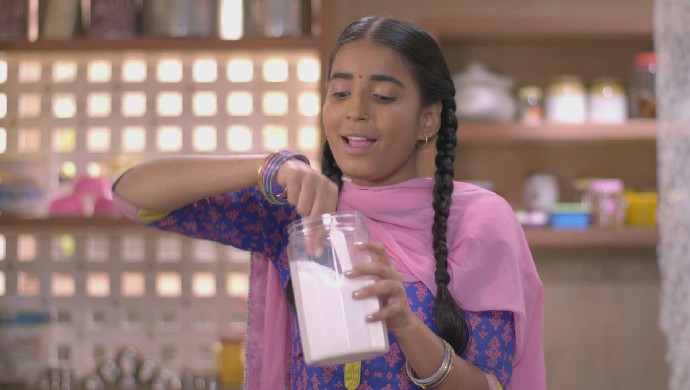 In the previous episode of Gudiya Humari Sabhi Pe Bhari, Gudiya tells Radhemohan that she has found a solution for their financial crisis. She shows him a pot and tells him that she has planted a ten-rupee coin in it. She assures him that when the tree grows big, they will get a lot of money. Hearing this, Radhemohan starts laughing. Gudiya makes tea for Sarla. Seeing this, Sarla gets emotional but when she tastes the tea, she comes to know that Gudiya had added salt instead of sugar.

In tonight’s episode, Radhemohan calls Pappu and asks him to take care of everyone at home since Sarla is not feeling well. Pappu assures him that he has ordered from a nearby restaurant because Sweety has gone out to attend her friend’s wedding.

Meanwhile, at home, Gudiya decides to cook food for everyone in her style. She packs tiffin for Pappu and goes to the shop to deliver it. Seeing the food made by Gudiya, Pappu ditches the restaurant food. When Radhemohan comes home, he eats the food prepared by Gudiya. Sarla asks him, why did he choose to eat the food prepared by Gudiya despite knowing the fact that it is not great to taste. He tells her that though the food is not tasty but Gudiya has made it with love and that’s enough for him.  A few moments later, Sweety comes back home saying she did not feel right to attend the wedding while Sarla was unwell.

Later that day, all the family members catch Gudiya enjoying the food delivered from the restaurant along with Jiya. In the evening, Sarla complains about Sweety not being responsible and gives her the example of Alka. Just then, Alka enters the house and seems furious.

Kumkum Bhagya To Bhabi Ji Ghar Par Hain: 5 Characters On TV Shows That Fell Off A Cliff
Sumaira Shaikh is a contestant on ZEE5’s Comedy Shots