Rajesh talks about shooting for Bhalla Calling Bhalla in his house and being interrupted by his kids, his neighbour's kids, crows and bikes. 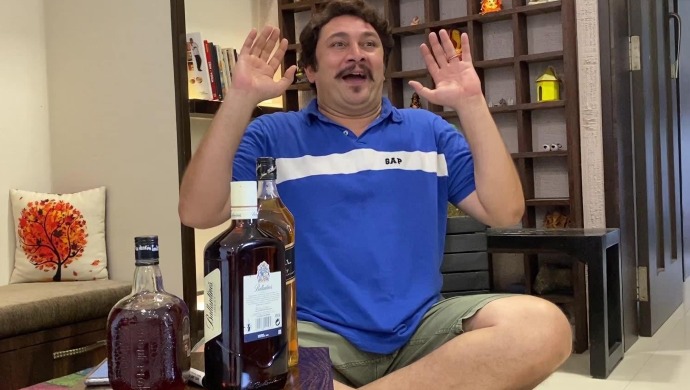 Rajesh Kumar is a popular face in Indian comedy shows, because of his role as Roshesh in Sarabhai Vs Sarabhai. He became famous for the pathetic poetry his character writes. He is set to give more such poetic gems in his new series Bhalla Calling Bhalla. In this light-hearted chat, he talks about shooting the entire series under lockdown on his phone with a lot of funny distractions.

Watch the trailer for the show here.

How did you happen to come on board for this show?

So I got a call asking me if I wanted to do something like this. They wanted to know if we can shoot at home and how convenient it will be. That was the bigger concern than putting the show together. The concept of the show is very unique because it’s only 8-10 minute long episodes and it tells the story in a crisp and funny way. I found it very innovative, so I wasn’t skeptical about it. It felt like the net practice of acting.

What were the challenges you faced in making a show during the lockdown?

The challenges were that we were not just acting, but also doing the sound and lighting and make-up or whatever else. You have to stop sometimes, to tell your kids to be quiet or because a crow is asking for food. The roads are usually quiet but sometimes there will be a loud motorcycle that goes by. I had to once tell my neighbour to keep their kid in the house because he was making noise at the window. Plus it becomes hectic to shoot at home because you are managing kids, cooking, cleaning, and everything.

Did it help you because your wife is also an actor?

Yes, that helped because I didn’t have to explain the technical aspects to her. She knew what kind of angle we needed when to give cues and everything. So once we started the process of shooting it is quick but finding time for it can be hectic.

How did you manage to collaborate with the other actors?

We did a reading for the first two episodes together, so we understood each other’s rhythm. Because getting people together on a call at home itself is a problem there’s always something to do. Now we do a ready of the next day’s script the night before the shoot. Now it feels like a bedtime story for us. We hear the story on the zoom call and go to sleep.

How have you been dealing with the lockdown personally?

It’s becoming a habit now. I feel like this is how we were meant to live, you know. So many unnecessary activities have stopped. Travelling from city to city for no good reason. Psychologically and economically yes it has been horrible, but personally, for me it has been okay. No depression or anything. I saw this as a chance to work on bettering myself.

What was the best part and the worst part about working in a series like this?

Not the worst part, but the scariest part is that the person holding your camera is your wife. Like you cannot say a little rudely like how are you holding the camera or don’t move. She will just say you do it yourself, not many professional cameramen will do that. The best part is the feeling of being a part of something new and something different. Also I am happy that all the lights I had put in the house are finally being put to good use. I feel good about my house.

How much of a struggle was it to find humour during such a dark time?

No not at all. Humour is a part of life and it is with you from the time you are born.

In Sarabhai Vs Sarabhai your character was famous for being a bad poet. In this series too you will be playing a kind of poet. Can we expect more bad poems from you?

Yes but these poems will be more contemporary. Also, these won’t be about my mother, this time my poems are about my wife and alcohol.

The first reason is the script is well-written. Secondly, it is experimental. The third reason is, the episodes are short and crisp. Fourthly, it completely deals with the humorous side of the lockdown. And lastly, the cast of the show is really brilliant.

Watch the first four episodes of Bhalla Calling Bhalla, streaming on ZEE5 and watch out for the next four dropping on 25th May and the last four on 30th May.