Attempting the never-done-before, Goldie places his seven Indian students in a Singapore school with Sumeet Vyas and Kubbra Sait in key roles. 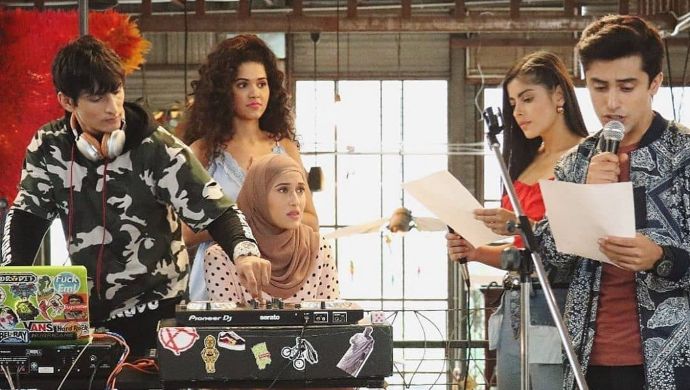 The high-school drama has attained a top spot and is comfortably sitting in the niche genre zone. From Jo Jeeta Wohi Sikander to Student Of The Year 2, teenage experience from 1992 to 2019 and in between has seen a paradigm shift. The fact that students once entering on bicycles now come driving swanky wheels to school perhaps can best sum up the unfathomable degree of change, in mindset and material. There is no denying that high-school corridors have always been the mecca of major drama with a melo twist. Goldie Behl’s new ZEE5 Original web series REJCTX taps into this very reality, that the naked eye can miss but can only be explored by delving deeper into the millennial life, under an updated microscope.

Years ago Goldie belted a cult show that inspired and encouraged a generation and now returns in the director’s chair for a digital debut. Seven Indian students – Aarav, Kiara, Parnomitra, Misha, Sehmat, Maddy, Harry in Singapore’s Jefferson World School form the central premise of REJCTX. Each of these students comes with a baggage of their own, a concoction of several incidents leading up to the formation of an underground music band leads the narratives of the story. We see the storyline unfold over two timelines – the flashbacks offer a deeper insight and build up each character to present day where Aarav goes missing and is assumed dead. Kiara Tiwary, played by Anisha Victor, attempts to unravel the mystery behind Aarav Sharma’s (Ahmed Masi Wali) absence and successfully establishes that he is neither dead nor in India with his parents.

Kiara starts out by hating Aarav because her parents want their daughter to seduce the potential Prime Minister candidate’s son. Parnomitra Rai (Ridhi Khakhar), on the other hand, is all about winning and only associates herself with all things elite. Sehmat is tagged a terrorist, simply for being a Muslim while Misha is mad about Maddy. Harry is the happy-go-lucky Punjabi friend to these boys and girls. From bullying to teen angst, pop culture to sexual tension, all against a backdrop of the typical millennial life make up for interesting highlights in the first two episodes. There is plenty to admire in Goldie’s first web venture.

Ahmed steps into the shoes of a tough character – switching between sensitivity and strength as and when required, effortlessly. Anisha successfully manages to not overegg the vengeance side of Kiara and plays it subtle and secretive. Sumeet Vyas as the sarcastic Vice-Principal Farhan Hussain is tailor-cut for the role. His arsenal of weapons includes things Indian fathers say. After all, how many actors we know can be a desi daddy figure and say the dialogues that can crack you up with a straight face? The look, yes, the transparent spectacles and charismatic suits are such a fresh switch! Speaking of fresh, Goldie presents Kubbra Sait as the student counselor Anushka Rao in a first for the actress. She is the same person who kisses a student off-duty and lives up to a strict supervisor during work hours. If you are looking for ‘Cuckoo ka magic,’ wait for the Anushka x Aarav narrative to roll further.

The behaviour of students in this series, of the same age, towards each other, is a brilliant reflection of reality. Right from the cinematography to costumes, background score to the beautiful landscape, dialogues to discussions we need to have, everything adds up to the cumulative power of REJCTX to hold a viewer’s attention. It can be owed to tease and thrill, which perhaps would have seemed bleak in a binge-watch and thus, the ten-part series will be told  two episodes at a time.

The age group is open for REJCTX because it doesn’t preach any generation and yet manages to give something to each one. It isn’t too tied up and drives largely on one note – rejection. Is there anyone who hasn’t faced one? Guessed so! As cliche as it comes, the first two episodes set up for some high-voltage action, the question is: when are the next ones coming? Till then, watch REJCTX on ZEE5 now.

Bhaiaji Superhitt Is The Perfect Entertainer To Relieve You Of All The Stress On A Hectic Day, Watch It On ZEE5

These Pictures Of Jiyaa Shankar In Her Party Wear Outfits Are Absolutely STUNNING!