It is often said that you can run, you can hide but you can't escape this King Khan's signature move. Check out Yogesh Tripathi trying to imitate SRK. 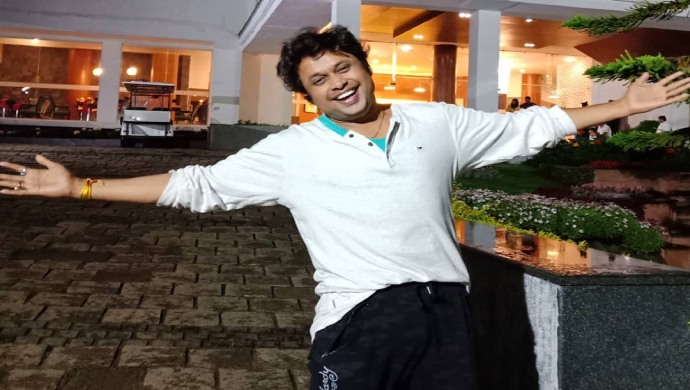 Now, it is often said that you can run, you can hide but you can’t escape this King Khan’s signature move. And recently, there’s someone from our telly world who is seen following his signature pose. No points for guessing, it’s none other than actor Yogesh Tripathi. ‘Arre dada!’ He is best known for playing the role of corrupt Daroga Happu Singh from And TV’s popular sitcom Bhabi Ji Ghar Par Hain!

There are many things that remind us of our favourite superstar SRK. Amongst them, it’s his famous signature pose, where he is seen striking a pose with his open arms. It’s something that many instantly associate the superstar with and it seems almost impossible to separate the two as well.

Taking inspiration from this, the actor took to his Instagram account to share this picture of him where he is seen imitating Shah Rukh Khan. Have a look at this picture of Daroga Happu Singh imitating the King of Bollywood here:

Yogesh can be seen spreading his arms in a similar way like SRK and we are totally loving it! Well, no doubt there are very few who aren’t a fan of Shah Rukh Khan and his celebrated signature pose? Have you ever tried this pose?

Share with us your fan moment in the comments section below.

Alarm Is An Action Thriller Series Which Revolves Around A Daring Cop
Nargis Fakhri and Sachiin Joshi in Amavas trailer
Happu And Beni, Best Friends Forever

5 Quotes By Dr. Babasaheb Ambedkar On The Indian Constitution To Revisit This Republic Day

Russell Peters Deported Tour: He Returns To India And Begins The Tour With A Bang In Pune